A Patients Guide to TMS Therapy 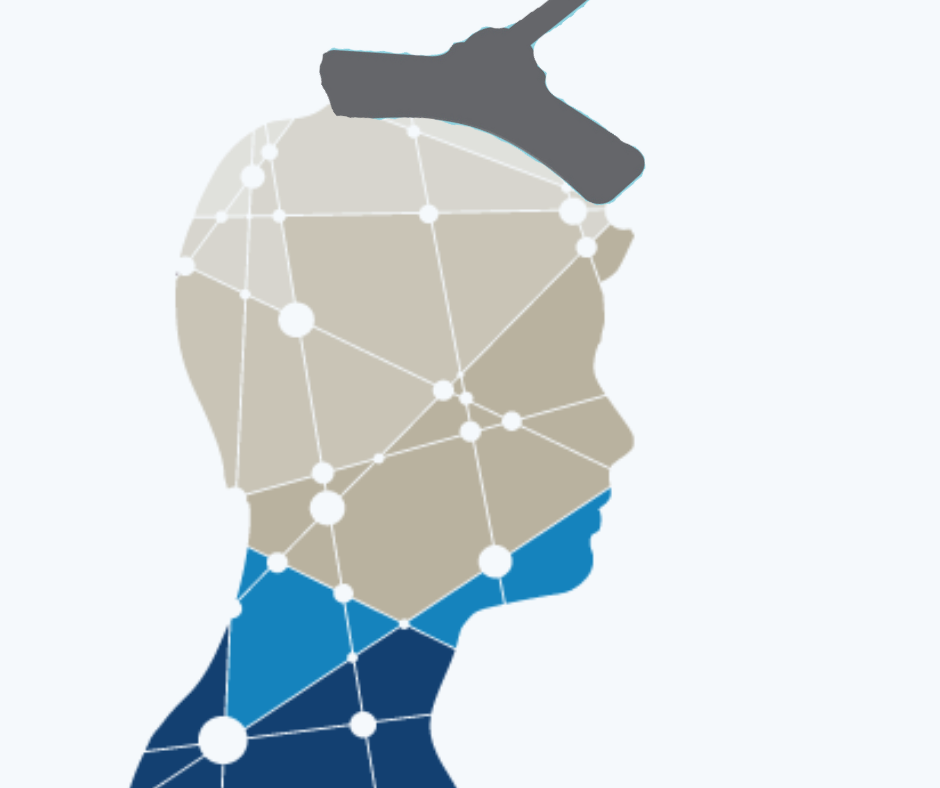 This Patient Guide to TMS Therapy article is packed with everything you need to know about transcranial magnetic stimulation (TMS). Learn the answers to the most common questions asked about TMS therapy. Make a well-informed decision regarding your own treatment and care for depression, OCD, and another mental health condition.

The Patient Guide to TMS Therapy will help you to learn what TMS therapy is, the most common conditions treated, FDA-approved TMS therapy devices, the effectiveness of TMS therapy, and what to expect during and after treatment.

What is transcranial magnetic stimulation (TMS)?

Transcranial magnetic stimulation (TMS) is a noninvasive, outpatient treatment that directs recurring magnetic energy pulses at the specific region (or area) of the brain involved in mood regulation. The painless magnetic pulses pass through the skull and stimulate brain cells which can improve communication between different parts of the brain. When these TMS pulses are delivered at regular intervals it is known as repetitive TMS (or rTMS). Exactly how TMS works is unclear, but the stimulation has a lasting effect on how the brain functions, which can ease depression symptoms and boost your mood

Magnetic pulses going into your brain might sound scar or it may even may you think that TMS is similar to ‘shock therapy’. However, the pulses used in TMS therapy are actually the same type and strength as the magnetic pulses used in MRI machines and are considered very safe. Unlike electroconvulsive therapy (ECT), TMS doesn’t require any kind of sedation or post-therapy downtime, and comes without any memory or cognition side effects. In fact, for most people TMS has fewer side effects than antidepressant medications.

What is TMS therapy used for?

TMS therapy has been FDA-approved for the treatment of major depressive disorder (MDD), obsessive compulsive disorder (OCD), and smoking cessation. While depression is a treatable condition, TMS is typically used when standard treatments, such as medication and therapy, have not provided satisfactory relief, or when the side of medication are intolerable. TMS can be a safer treatment option for many patients because it does not cause any undesired systemic side effects like medications and brings remission to depression for most patients. In many European countries, TMS is approved for a multitude common conditions including:

Depression can take a heavy toll on a person, changing how you think, feel, and function in your daily life. Many people are not able to gain relief through self-help, therapy, medication, or a combination of these treatments, and the sense of hopelessness never lets up. If you’re suffering from major depression that’s proven resistant to traditional forms of treatment, then transcranial magnetic stimulation (TMS) therapy may be the best treatment option. Just as antidepressant medications aim to stimulate your brain chemically, TMS treats your condition at the source using magnetic fields to restore the neurochemical balance and neural pathways in your brain.

A variety of TMS systems are available, including:
Surface transcranial magnetic stimulation (surface TMS) devices use a figure-of-8 magnetic coil which can penetrate 0.6 inches under the skull to reach specific brain regions.

Deep transcranial magnetic stimulation (dTMS) devices use a larger H-coil which allows the magnetic energy to penetrate deeper into the brain, up to 1.6 inches below the skull.

Rapid TBS (theta burst) therapy devices are considered just as safe and effective for the treatment of major depressive disorder as standard TMS, but these devices require sessions of just 3-6 minutes rather than the 20-40 minutes required by most TMS devices.

There are also simple brain stimulation devices that have been cleared by the FDA in the U.S. for use at home. However, these are not strictly TMS devices. Rather, they’re classed as Cranial Electrotherapy Stimulation (CES) units which use electric currents instead of magnetic pulses to stimulate the brain. The effectiveness of these devices seems to be up for debate. As with any medical treatment for depression, it’s important to discuss the best options with your doctor.

How effective is TMS therapy?

Most published trials have yielded results supporting the use of TMS to improve cases of treatment-resistant depression. For people with major depression that have not benefited from medication, over 50 percent experience significant improvement in their symptoms with TMS, while about one in three gain total remission from their depressive symptoms.

That doesn’t mean that TMS is a cure for depression and that your depression symptoms won’t return, though. In fact, the positive results from TMS tend to last for an average of about a year after treatment. However, it’s important to remember that depression is not just the result of a chemical imbalance but is caused by a combination of biological, psychological, and social factors. In other words, your lifestyle choices, control over negative thoughts and behaviors, and your coping skills also contribute to your depression. Therefore, you can use the improvements in your energy and drive following TMS therapy to begin making lifestyle changes—such as improving your diet, exercising, and building your support network—that can help preserve your state of remission from depression.

What can I expect during a TMS treatment?

TMS is a relatively short, noninvasive, and can be done in your doctors office or a TMS therapy clinic. That means that it doesn’t involve surgery, sedation, or anesthesia, and no down time is needed afterwards. You stay awake and alert throughout the treatment. TMS therapy is also non-systemic, which mean that it has no effect on other areas of your body or cause any systemic side effects, like most antidepressants.

A typical TMS treatment course includes daily sessions (5 times per week) for approximately 6 weeks, followed by a taper of six additional treatment sessions over a period of 3 weeks. Some people find it helpful to occasionally return for maintenance treatments following the initial treatment course to help maintain their state of remission. A TMS session generally about lasts 20 minutes. Some newer treatment devices allow for the treatment to be done in as little as 3 minutes (instead of a 19-minute treatment).

During your TMS treatment, the clinician will seat you in a comfortable chair, provide you with earplugs, and then place a magnetic coil on your head, near the area of the brain to be treated. In the case of depression, this area is the left prefrontal cortex just above the left eyebrow.

Short electromagnetic pulses are then administered through the coil. The magnetic pulses easily pass through your skull and cause small electrical currents that stimulate nerve cells.

You’ll hear clicking sounds and feel a tapping or tingling sensation on your head during each treatment
You may feel some scalp discomfort during the treatment and for a short time afterward, but this typically subsides after the first few treatments as the scalp desensitizes.

What happens after TMS therapy treatment?

Upon completion of your treatment, you’re able to go straight back into your day, drive back to work or home, and continue on as normal.

What are the risks and side effects to TMS therapy?

Unlike the oldest brain stimulation therapy, electroconvulsive therapy (ECT), TMS has no effect on memory or mental clarity, and does not cause muscle aches or spasms or other undesired side effects. It also avoids the negative side effects of sedation required for ECT. The only side effects associated with TMS include temporary scalp discomfort and headaches. While about 1 in 5 TMS patients report a slight headache, it is typically relieved with over-the-counter medications and tends to diminish over the course of treatment.

About 1 in 5 patients report painful scalp sensations or facial twitching during the magnetic pulses, which also tend to diminish over the course of the treatment.

Repositioning the coil and adjusting the stimulation settings can also help to reduce these mild side effects.

The most serious risk of TMS is the possibility of producing a seizure—but the risk is very small at around .001%. There have been only a few documented cases of seizures occurring due to TMS treatment, which is generally due to a person having a low seizure threshold. If you have a high risk of seizure, such as with epilepsy, head injury, anorexia, or alcohol use disorder for example—then you’re unlikely to be a candidate for TMS.

TMS has been approved in the U.S. for just over 13 years and so far, there are no reported lasting negative effects associated with the treatment. With time and continued research, TMS researchers will gain a better understanding on the long-term effects of TMS therapy.

Who is not a candidate for TMS therapy?

In addition to those with epilepsy, TMS is not suitable for several other types of patients. Since TMS uses magnetic energy, people who have metal in or within 30 centimeters of the head are not able to receive TMS, with the exception of braces or dental fillings.
Examples of metal objects that would prevent TMS treatment include:

Other factors that may preclude you from receiving TMS therapy include:

What are the benefits of TMS therapy?

There are numerous benefits to receiving TMS therapy as a treatment option for depression in lieu of antidepressant medications or electroconvulsive therapy (ECT). Primarily, TMS has proven to be more effective than medications without all the side effects. While TMS is not necessarily more effective than ECT, it is not invasive and does not require hospitalization, sedation or anesthesia, and doesn’t cause memory loss and other undesired symptoms commonly associated with ECT.

Patients who elect to TMS therapy often experience improved sleep, less body aches, improved anxiety, along with the reduction in their depressive symptoms. The greatest benefits to TMS in the treatment of depression, is the longer state of remission.

We are hopeful that TMS therapy will be approved for the treatment of anxiety and substance use disorder in 2022.

After reading this Patient Guide to TMS Therapy, if you feel you may be experiencing symptoms of depression, be sure the take the depression screening located HERE to help determine the severity of your symptoms. Keep in mind this depression screening is not intended to diagnose depression, but rather help you to identify if you should seek a thorough evaluation by a licensed mental health provider, such as a psychiatrist.

Download your own copy of a Patient Guide to TMS Therapy.